Drupa line up is virtually there 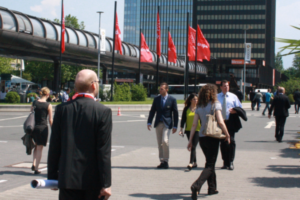 With travel impossible, Drupa has switched to become a virtual event, which is due to open its doors next week with a line up of more than 150 participating companies.

Drupa will open next week, a year later than expected and instead of in the Dusseldorf Messe, it takes place in cyberspace. Drupa will be Virtual Drupa.

It has attracted around 10% of the number of exhibitors that had planned to attend the 2020 event and if it attracts 10% of the audience, it will still be the largest print event to take place in cyberspace since the arrival of the Covid-19 pandemic.

So far 170 companies have taken stand space – though it is not clear what this means exactly – and fewer than a third of these will be relevant to most European or US printers.

The exhibiting companies are just part of the knowledge-sharing platform that Drupa is promoted to be. There are 130 conference sessions over the four days and further presentations made by the exhibitors. And there is a matchmaking area where suppliers can connect with visitors and arrange one to one meetings according to the profile they have completed.

This will be done in what exhibition director Sabine Geldermann says is a “sensitive way”. The technology matches the profile of the visitor with suggestions of exhibitors and “allows our audience to get direct contact” with suitable exhibitors to provide the new ideas and inspiration that is a hallmark of the real-life exhibition. The networking established in this way can go for six months, the exhibitor contacting the printer via email in the first instance.

Live presentations will also be available to watch on-demand after so that visitors can be comfortable that they will not miss out on any of the conference sessions. These are grouped around four key themes for the virtual Drupa, introduced by an on-topic keynote each day. The four key areas examine artificial intelligence, the circular economy, the connected consumer and the platform economy.

Across the four days further presentations, from independent voices as well as from the exhibitors according to their status, will delve further into packaging subjects in particular, reflecting the belief that this is a sector eager to plunge into digital means of production and a sector too that in contrast to commercial printing, is still growing.

The exhibitor list contains companies from all parts of the production chain, but has some glaring omissions. Thus Komori, Koenig & Bauer and Heidelberg represent litho printing while RMGT and Manroland Sheetfed are absent, though the latter’s web print counterpart is in the line up.

In digital printing, Fujifilm is joined by Xeikon, Kodak, Konica Minolta, Kyocera, Riso and HP Deutschland, but there is no Ricoh, Xerox or Canon. Muller Martini, Polar, Kama, SEI, Trotec, Ideal and FKS fly the flag for finishing with Mimaki, EFI, SwissQPrint and Zund in large format inkjet. Bobst, Omet, Esko and Comexi will interest packaging companies beyond those already mentioned. Landa, whose first presentations in 2012 bordered on virtual reality, will return with the challenge of exciting an audience that in the last 12 months has had to spend too much of its time in virtual rather than physical meetings.

Prepared on the basis of information from Print Business