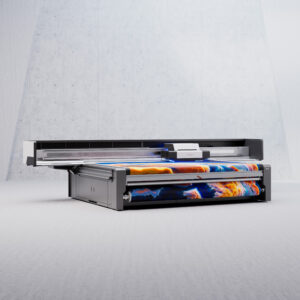 At Fespa 2022 in Berlin, swissQprint dropped a surprise by unveiling a completely new model: the Kudu high-end flatbed printer, featuring an impressive combination of high productivity and firstclass output quality.

In a totally unexpected move, swissQprint unveiled a new printer model at Fespa 2022 in Berlin: Kudu is a 3.2×2 metre high-end UV LED printer that complements the existing flatbed range – Nyala, Impala and Oryx. Like the 4th generation of this trio, which swissQprint launched only six months ago, Kudu operates at a redefined standard of quality. It is also highly productive and offers ten colour channels (nine on the other models). Top-rank output and quality At its maximum productivity of 300 square metres per hour, the UV printer delivers convincingly high output quality.

Carmen Eicher, Chief of Sales and Ma rketing Officer at swissQprint,explains: Kudu incorporates the latest print head technology, with an addressable resolution of up to 1350 dpi. New mechanics and software The flatbed printer stands on a newly designed mechanical foundation and operates using the latest linear drives. This ensures precise droplet placement at such high speeds, adds Carmen Eicher.

Kudu features the Tip Switch vacuum, like the other flatbed and roll to roll printers from swissQprint. In the case of Kudu, it is divided into 260 zones, which gives the operator very simple and selective control of the vacuum. And speaking of control: Lory, the output software developed in-house by swissQprint, is the Kudu operator’s cockpit. The graphical user interface with its virtual flatbed is designed for intuitive and safe operation. 3.2 m roll to roll option and ten colour channels Kudu, like all swissQprint flatbed printers, is expandable with a roll to roll option. It is the first swissQprint model to feature ten colour channels, which further increases application diversity. Users configure the channels according to their needs, and may adapt the configuration at any time later. The newly developed universal ink (Greenguard Gold certified) is available in CMYK, light cyan, light magenta, light black, white, effect varnish and primer as well as the spot colours orange and neon yellow and pink – a swissQprint exclusive.

Prepared on the basis of information from swissQprint