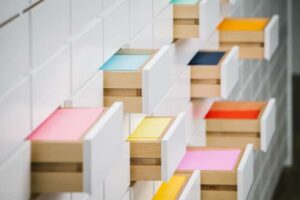 The pandemic has powered a trend for colours and designs that transcend the borders between media, as UK designers gear up for a future where technology is integrated even closer into our daily lives, according to new research.

In a follow-up to its 2019 report on colour trends, Cumbrian papermaker James Cropper found the pandemic had had a massive impact on designers’ tastes, with social media and the natural world the rising stars.

Alison Rodwell, colour trend expert for James Cropper, told Printweek: “With reliance on technology to work, shop, and socialise during the pandemic, strategies for how colours transcend the physical and digital has become more important than ever.”

Almost half (44%) of the 500 designers surveyed by James Cropper agreed that the emergence of the metaverse was a crucial moment for brands, as they try to translate their colour identity into virtual reality.

Rodwell called this merger of physical and digital the ‘phygital’ world.

She added: “It’s like nothing we’ve ever seen before, and it will dramatically alter the way consumers engage with brands. Awareness and consideration of how colour is displayed and perceived in the digital world is a key consideration for our industry.”

The rising star of digital design, however, does not mean an eclipse for physical media. While twice as many designers now considered it an influence on colour trends (from 10% in 2019 to 20%), the popularity of online shopping has meant packaging and print becoming part of the experience.

Rodwell said: “Online is certainly a critical gateway, but look at the unboxing trend: it’s huge for a reason.

“Consumers crave that hands-on experience and so brands need to nurture this, delivering across all touchpoints.”

While social media has become more prominent as an influence over designers’ tastes, consumer taste has been shaped by global issues.

A renewed interest in climate change, for example, might have prompted more than a quarter (28%) of designers to name nature as an influence, according to Rodwell.

She said: “As society moves towards creating a sustainable planet, we’re seeing this ecological influence on colour reflected everywhere.

“Consumers now expect brands to demonstrate the efforts they are making to shift to greener initiatives and eco-friendly packaging is one of those switches. This development is often synonymous with using recycled materials.”

For many designers in the UK, however, the pandemic has meant that people have been looking towards the past, or to a future where Covid is no longer a concern.

Almost a third (32%) reported an interest in retro designs, and one in five (21%) found that colours signifying hope and stability were a priority.

Rodwell said: "It's easy to understand how the social impact of the pandemic, world focus on climate change and politics has created this yearning for happier times and also a renewed connection for many with nature."

Prepared on the basis of information from Print Week